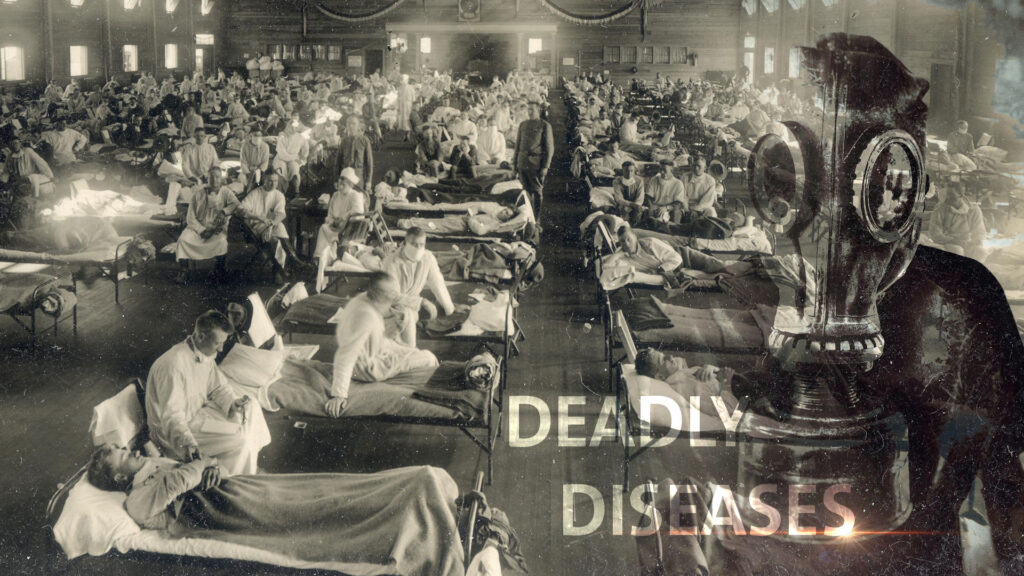 Diseases are everywhere in many forms from viruses to Bacteria. There are four types of diseases: infectious diseases, deficiency diseases, hereditary diseases, and physiological diseases. Diseases also can be classified as communicable and non-communicable diseases.

In this post, we will focus on a group of some deadly diseases that mankind has seen and dealt with throughout history.

For starters, we must know what a disease is. A disease is a definite pathological process that has a set of signs and symptoms. It may affect the whole body or maybe any part of it, and diagnoses may be known or unknown. The disease is an incorrectly functioning organ, part, or system of the body resulting from the effect of the genetic or developmental errors, poisons, nutritional deficiency or imbalance, or unfavorable environmental factors.

Death due to a disease is called death by natural cause. There are four types of diseases: infectious diseases, deficiency diseases, hereditary diseases, and physiological diseases. Diseases also can be classified as communicable and non-communicable diseases.

Nutritional deficiency or (Deficiency diseases) occurs when the body doesn’t absorb or get from the food the necessary amount of nutrients. This can lead to various health problems.

They are diseases that are inherited genetically, Hereditary diseases passed from one generation to another through defective genes. These diseases are transmitted in the same family. The chromosomes in humans are responsible for passing the traits from the parents to the offspring.

Physiological diseases are the diseases in which the organs or systems in the body malfunction causing illness. The disease normally occurs when the normal functioning of the body is affected because the body’s organs have malfunctioned.

It could also be because organs are not working or the actual cellular structures have changed over a period of time and then causing illness. The factors that cause physiological disease may be of a genetic origin. It can be also caused due to the deficiencies by improper intake of diet.

Communicable diseases those spread from one person to another through

various ways like contact with blood and bodily fluids, breathing in an airborne virus, or by being bitten by an insect.

Non-communicable diseases are diseases that are not transmissible directly from one person to another. Tend to be a long duration and are the result of a combination of genetic, physiological, environmental, and behavioral factors.

Plague is an infectious disease, usually, these diseases are caused by pathogenic microorganisms, such as bacteria, viruses, or parasites. The diseases can be spread, directly or indirectly, from person to another. The plague was caused by the bacterium Yersinia pestis. Symptoms include fever, weakness, and headache. Usually, this begins one to seven days after exposure. The plague has three forms. In the bubonic form, there is swelling of Lymph nodes, the septicemic form tissues may turn to black and die. Large plague outbreaks occurred in history, it was well known by “Black Death” in the 14th century, resulting in more than 50 million deaths.

Ebolavirus is a viral hemorrhagic fever of humans and other primates caused by Ebolavirus diseases. It is considered to be an infectious disease sharing the same characteristics as any other infectious disease caused by pathogenic microorganisms, such as bacteria, viruses, or parasites. The diseases can be spread, directly or indirectly, from person to another. The six known virus species are named for the region where each is originally identified: Bundibugyo ebolavirus, Reston ebolavirus, Sudan ebolavirus, Tai Forest ebolavirus,

Zaire ebolavirus and Bombali ebolavirus. Ebola Virus was first described after outbreaks of southern Sudan in June 1976 and in Zaire in August 1976.

Spanish flu, also known as the 1918 flu pandemic, was an unusually deadly influenza pandemic caused by the H1N1 influenza A virus. This infectious disease Lasted for more than 12 months from spring 1918 to summer 1919. It infected 500 million people, with an estimated 50 million deaths worldwide.

Severe acute respiratory syndrome coronavirus (SARS) is an enveloped, positive-sense, single-stranded RNA virus that infects the epithelial cells within the lungs. This infectious disease infected humans, bats, and palm civets. The 2002-2004 outbreak was first identified in China in 2002. It infected over 8000 people, and at least 774 died worldwide.

COVID-19 pandemic is an infectious disease caused by severe acute respiratory syndrome coronavirus 2 (SARS-CoV-2). The outbreak was first identified in Wahan, China in 2019. The World Health Organization (WHO) declared the outbreak a Public Health Emergency of International Concern on 30 January 2020, and a pandemic on 11 March 2020.

Covid-19 did not just leave an effect on mankind but it is reshaping our new normal, and by the new normal we mean that the new lifestyle of most of the people as it has changed in the last few months. Many employees are working from home, the whole concept is getting more and more important and the online money transaction became more valuable than ever in some regions.

We are hoping that the pandemic comes to an end sooner than later, and waiting for this part to be considered history, we will be there drafting it for you.